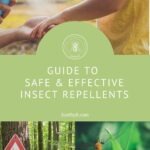 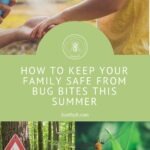 Summer is here, and so are the mosquitoes. The best parts of summer almost always come with bug bites. Last summer I sprayed my son with DEET and sent a silent prayer that it wouldn't make him grow a third eye. I wondered if DEE is safe? So this year, I decided to find out what the safest and most effective insect repellent is.

I searched The Environmental Working Group (EWG) for what they had to say about insect repellents. The EWG's 2018 Guide to Insect Repellents recommended these insect repellents to prevent Zika, West Nile, and Lyme disease: DEET, Picaridin, IR 3535, and Oil of Lemon Eucalyptus.

The EWG guide also said this, “DEET's safety profile is better than many people assume. DEET isn't a perfect choice nor the only choice. But weighed against the consequences of Zika disease and West Nile virus, we believe it is a reasonable one."

Not a ringing endorsement, but the Centers for Disease Control nudged me yet again to DEET:

“Insect repellents that contain DEET offer the best protection against mosquito bites,” according to the CDC.

But the CDC is just another government agency, and the US government has been known to cave to corporate pressure. So I headed to Sweden’s highly regulated pharmacy, Apoteket, to see if I could buy it there. Low and behold, even Apoteket sells DEET (and they don’t even sell real sleeping pills.)

DEET was starting to sound like a good choice. Could it be that DEET is safe and effective?

Why use an insect repellent?

If you've ever read "Eat, Pray, Love" you might remember the part where Liz is meditating at her ashram in India when mosquitoes attack her. She remained seated, determined not to scratch and hit at every little distraction. It was part of her spiritual journey. She embraced the stings and stayed calm. I love that book, and I get the metaphor, but I'm not about to do the same, and I don't want my children to either. Here's why:

Then there's Lyme disease which is spread by ticks. About 30,000 cases of Lyme disease are reported to the CDC each year in the US. However, the number of people diagnosed may be closer to 300,000, with 96% of cases coming from the Northeast and upper Midwest according to the CDC.

Zika surprised me. For all the press, you'd think this was an epidemic. But of the 451 cases reported to the CDC in 2017, only 7 cases are believed to have been acquired in the US. Two in Florida and 5 in Texas.

The only effective natural alternative is Oil of Lemon Eucalyptus according to the EWG and the CDC.

As for the other organic stuff, this is what the EWG has this to say about it, "EWG research indicates that botanically based bug repellents are not often the best choice. The most common contain castor oil, cedar oil, citronella oil, clove oil, geraniol oil, lemongrass oil, peppermint oil, rosemary oil, and soybean oil. While effectiveness varies, and there may be a few exceptions, most botanicals repel bugs for a short time, if at all."

“Use insect repellents containing DEET when needed to prevent insect-related diseases," according to the American Academy of Pediatrics.

However, children younger than two months should not use DEET, according to the Academy.

The EPA says, “DEET is approved for use on children with no age restriction. Also, there is no restriction on the percentage of DEET in the product for use on children, since data do not show any difference in effects between young animals and adult animals in tests done for product registration. There also are no data showing incidents that would lead us to believe there is a need to restrict the use of DEET.”

A Canadian study says, “DEET-based insect repellents are relatively safe when used as recommended. The suggestion that young children are more prone than adults to the neurotoxic effects of DEET is not supported by critical evaluation of existing evidence,” according to CMAJ.

The best brands for DEET

After looking at all the brands that sell DEET, I decided on OFF Deep Woods* Insect Repellent VII because it has 25% DEET which falls in line with the American Academy of Pediatrics recommendation of 10-30% DEET concentration. Children should not use concentrations higher than 30% DEET.

Even after all that research, I'm not endorsing DEET or Oil of Lemon Eucalyptus. I'll use both sparingly and only when we're in mosquito and tick-prone areas. But I do feel more confident knowing I'm protecting my kids not only from the sun with good sunscreen but also from bug bites and diseases with reliable bug repellents.

So if you're looking for the most effective insect repellent DEET and Oil of Lemon Eucalyptus are good choices.