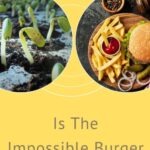 Food additives freak me out. Food that pretends to be something it isn't, scares me even more.

Soy leghemoglobin sounded a little scary, but not more frightening than the antibiotics and hormones in real meat. The world desperately needs a delicious alternative to real meat, so I went in with an open mind and decided to taste first, research later.

I ordered the plainest “Impossible Burger” I could get my hands on at Gott's Roadside in Palo Alto.

With huge anticipation, I took a bite.

Here’s our review: It tastes like a burger. It’s a little less dense than a real meat burger. It had less charcoal flavor than the real thing served at Gott's. But it’s good. I doubt I would have noticed the difference if I didn't know it was vegan. It looks like a burger that's been cooked a little on the rare side.

I figured I could write a nice fluff piece about this new, “sustainable” hamburger and that would be the end.

The following Tuesday, the New York Times ran an article about the Impossible Burger.

“Now, its secret sauce — soy leghemoglobin, a substance found in nature in the roots of soybean plants that the company makes in its laboratory — has raised regulatory questions,” says the article Impossible Burger’s ‘Secret Sauce’ Highlights Challenges of Food Tech. “Impossible Foods can still sell its burger despite the F.D.A. findings, which did not conclude that soy leghemoglobin was unsafe.”

If there are regulatory questions, why can they still sell the burger? I needed clarity.

Impossible Foods responded to the article with an Open Letter to Journalists.

“Its key ingredient, soy leghemoglobin, has been considered “generally recognized as safe,” or GRAS, since 2014, when a panel of top food safety experts found it was safe to eat. This finding by the experts constitutes what is referred to as a “self-affirmed GRAS.” The effect of a self-affirmed GRAS is that food companies are in compliance with federal regulations and may market the product,” according to the letter.

Impossible Foods submitted a notification to the FDA of soy leghemoglobin as GRAS in 2015. The FDA came back with questions, which is not uncommon. The application was withdrawn and further studies, including a rat test, were done.

“We reviewed the applications that received No Questions letters and they uniformly involve rat testing. As a company working to transition the world away from using animals as food, we took time and used caution in making decisions that would involve rat testing,” said Jessica Appelgren, Director of Communications at Impossible Foods. “We did indeed submit our first GRAS to the FDA to ensure transparency and consumer confidence. We strive to be the most transparent food company ever.”

What is “Generally Recognized As Safe” (GRAS)?

Impossible Foods did not need to submit soy leghemoglobin to the FDA to be considered GRAS. Instead, the FDA allows companies to designate food additives like soybean leghemoglobin as GRAS based on the company’s independent food safety experts.

“There are an estimated 1,000 GRAS substances for which safety decisions were made by the food industry without any notice at all to FDA, and thousands more chemicals for which both proof of safety and continued federal oversight are minimal,” according to Consumer Reports.

Is the Impossible Burger safe?

The US Food and Drug Administration must believe so:

“Impossible Foods received a no-questions letter from the US Food and Drug Administration, validating the unanimous conclusion of food-safety experts that its key ingredient is safe to eat,” according to Impossible Foods.

With that no-question letter, I've decided the Impossible Burger doesn't worry me more than the ingredients in other processed foods. But everyone has to do what's right for their own body.

Plus, if you’re concerned about food additives, choose fresh fruits, veggies, and beans. You know the drill. You don't need to be a nutritionist to know that fruits and veggies are always a safe bet.