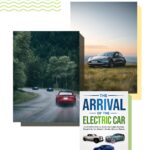 This is a guest post is by Chris Johnston, co-author of The Arrival of the Electric Car: An Overview of the EV Revolution Happening Now - A buyers Guide, Owners Guide, History, Future. The book is a comprehensive, easy-to-understand overview of the passenger electric car universe including a buyer's guide, preparing to own an electric car, the history of electric cars, and what we can expect in the future. If you've been thinking of buying an electric car, but you're not completely convinced, learn all about the advantages of electric cars below.

Ask most electric car owners what they like about their cars and they will continue to talk well past not ever having to stop at a gas station again.  They will describe how amazingly cheap their electric cars are to own, how reliable they are, and their stunning acceleration.

Producing gasoline or diesel fuel is an energy-intensive process. A conservative estimate is that it takes at least 8 kWh of electricity to explore for, drill, transport, and refine a gallon of gasoline. According to the U.S. Department of Energy, approximately 66% of domestic petroleum transport (by ton-mile) occurs by pipeline. Pipeline pumps are typically driven by electric motors. Pump jacks (shown above) are used to extract crude oil.  Most are powered by electric motors.

The average gas-powered vehicle consumes 31.8 kWh of electricity to travel 100 miles (in addition to emitting greenhouse gases from burning gasoline), according to the Environmental Protection Agency.

Electric car owners report that one of the most enjoyable features of driving their cars is the instant acceleration. The faster acceleration is delivered by the torque that electric motors can deliver at low speeds. This is a significant advantage over gas-powered cars.

Torque is the rotational force that causes a shaft to spin. EVs’ electric motors deliver 100 percent of their available torque instantaneously. They don’t have to build up speed before they reach peak power. This enables their fast stoplight starts and superior passing ability.

The biggest disadvantage that gas engines have with respect to torque output is their power band. The power band is the range of revolutions per minute (RPM) around peak power output. Electric motors usually have a flat power band, meaning that they deliver maximum torque the moment they start turning. Internal-combustion engines are different. They must reach a high enough speed before they reach their power band.

Another advantage of electric cars comes up when you compare electric cars and internal-combustion engine technologies in terms of efficiency. Efficiency is the amount of energy that you put into a vehicle as gasoline or electricity compared to how much energy you get out to move you forward.

This makes electric cars two to three times more efficient than gas-powered vehicles. So, even if electric cars are recharged with electricity generated by fossil-fuel-based sources, which is true in some cases, their motors are more efficient at transferring that energy stored in the batteries into motion. That means much less waste and a better deal for the environment.

Gasoline engines are riddled with inefficiencies. A significant portion of the energy from gasoline is converted to unwanted heat. Open the hood after driving even only a few miles, and you’ll feel the heat. You’ll feel the loss of energy. That’s why gas-powered cars need complex and expensive radiator systems with their associated belts, pipes, and heat exchangers.

Due to their engineering simplicity, electric cars are far more reliable than gasoline-powered vehicles. It is difficult to get an exact parts count, but it is clear that electric cars have fewer moving parts in their drivetrains than cars with internal-combustion engines. More parts, and especially more moving parts, mean more potential points of failure.

According to Tesla, their drivetrain only has about seventeen moving parts compared to the two thousand or so in a typical drivetrain of an ICE vehicle. Internal-combustion engines have pistons, valves, camshafts, and oil pumps whirling around at high speeds. None of these exist in an electric vehicle. Furthermore, most electric cars do not change gears, so there is no need for a complex and expensive transmission and clutch that needs to be maintained.

A brief history of electric cars

Now that you've learned about the many advantages of electric cars, here are some interesting historical facts you may not know.

To learn more about the advantages of electric cars, fun historical facts, and everything you need to know about being an electric car owner, buy the book.

Chris Johnston has decades of product management experience in telematics, mobile computing, and wireless communications including positions at Trimble Navigation, AT&T, Honeywell, and a couple of Silicon Valley startups. He also spent a year in India setting up an Internet-of-things practice for a major Indian corporation.  Mr. Johnston has a B.S. in electrical engineering from Purdue University and an MBA from Loyola University of Chicago.  Chris lives in Washington State with his wife and two kids. When not working, he enjoys open water swimming, cycling, and flying (as a private pilot).

Ed Sobey holds a PhD in science and teaches for Semester at Sea. He also lectures at sea for passengers on several cruise lines and has traveled the equivalent of ten times around the world at sea. The Fulbright Commission has awarded Ed two grants for training science teachers in foreign countries. To date he has trained teachers in more than 30 countries. He is a former naval officer and has directed five science centers, published 34 books, and hosted two television series on science and technology.

Rebecca is a search marketing consultant for ecopreneurs, a LEED Green Associate, and an ISSP Sustainability Associate. She's the founder of EarthyB.com, which received a Mom's Choice Award honoring excellence in family-friendly media. She’s also a proponent of the electrify everything movement and a mom living in Silicon Valley.

I write about how parents can lower their environmental impact at home. My work is helping ecopreneurs with their search engine marketing campaigns. You can learn more about me and my credentials here.

My mission is to help the transition toward a clean economy. Why? Because I want a livable climate for my children and all the children on the planet.