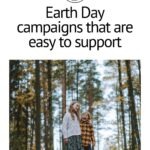 Mothers out Front is a grassroots group that's organized by moms for moms who are asking local politicians to phase out fossil fuels in our local communities. In an article about today's female sustainability movement leaders, I asked Linda Hutchins-Knowles from Mothers out Front what she wants people to know this Earth Day.

"I want people to know that the environmental movement has a niche for each and every person, even busy parents! The most effective thing you can do is to join a grassroots organization, like Mothers Out Front, that builds the political will to pass bold policies to accelerate a just transition from polluting fossil-fuels to clean, renewable energy and draw down excess carbon from the atmosphere. When working in community together, it’s easy and even fun—and a great antidote to climate grief!" she said.

That fee collected would be re-distributed to Americans to spend as they wish while there's a market adjustment as we transition from fossil fuel-based energy to clean and renewable energy sources. There would also be a border carbon adjustment to protect U.S. manufacturers and jobs.

In order to transition to a clean and circular economy, companies that create pollution need to pay for that waste and pollution. If they don't, we pay for it in other ways. Climate change gets the most attention these days, but air pollution is linked to health issues like asthma.

To learn more read about the importance of putting a price on waste and pollution, read How carbon pricing could simplify everything.

Offset your own carbon footprint

One of the easiest ways to offset your own carbon footprint is to subscribe to a monthly service like Wren. Wren* helps support carbon offsetting projects all over the world, and everyone can contribute for as little as $20 per month. When you subscribe you get an email each month with an update on the carbon offsetting project you're supporting. These emails are inspiring and informative.

Read: How to offset your family's carbon footprint

Previous Post: « Why activists are calling for mass reforestation as a solution to climate change
Next Post: How circular design products could revolutionize what we buy »