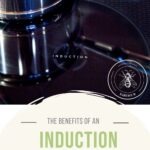 My husband and I decided to go all-electric in our 1960's San Jose ranch-style fixer-upper a while ago, as mentioned in our previous post about our sustainable home improvement plans. Although we've already done other projects to make our home more ready for an all-electric future, the induction range was our first intentionally purchased electric appliance.

Before I go further, let me explain why we're doing this. If you're unfamiliar with the electrify everything movement, here's an excellent recap from David Robers from Vox, one of my favorite writers on the subject.

We know, or at least have a pretty good idea, how to get electricity down to zero carbon. There are options: wind, solar, nuclear, hydro, geothermal, and coal or natural gas with carbon capture and sequestration (CCS). There are plenty of disagreements about exactly what mix of those sources will be needed to get us to a carbon-free grid, and what mix of centralized versus distributed resources, and what mix of supply-side versus demand-side solutions — but there’s broad consensus that pathways to fully clean electricity exist."

There's a grassroots push happening within forward-thinking cities like San Jose, Ca that are passing legislation to prevent new homes from being hooked up to the natural gas lines. Instead, new construction should be all-electric. This is all great for new homes, but our home is old and outdated and often in need of home improvements. So as the old breaks and needs replacing, we're doing our best to upgrade it to the most sustainable and energy-efficient options possible.

Our latest sustainable house upgrade is our induction stove. I'll admit I was a bit hesitant because I have loved our natural gas range. But now that I've had the induction stove for about a month, I have to say, it wins hands down. Here are the benefits of the induction range, plus a few of the cons.

Read: Home electrification: Why cities are phasing out natural gas

Benefits of an induction range

There are a lot of benefits to an induction range, which I write about in detail below. But I might as well tell you up front that it's a bit on the expensive side for an appliance. I write about that a bit further down.

This has taken me some time to get used to. I’m used to the flame from the natural gas taking some time to heat up the pan, so I used to turn the flame all the way up while I prepped some food or got my ingredients out. That doesn't work with an induction stove, or at least not when I turn on super boost. I set off the fire alarm twice the first two weeks I had it.

Now that I'm used to the settings on the induction cooktop I've stopped incinerating cubes of butter. I love that it takes significantly less time to boil a giant pot of water now. I'm not the most patient cook, so the super-fast heat is awesome. Plus, the induction cooktop offers a more even heat than the natural gas flame that always seems to be all over the place.

All the food and gunk that accumulated under the grate of my natural gas stove used to annoy me every single time I used it. With the glass cooktop cleaning takes seconds. I just wipe up spills as they happen, then spray and wipe the cooktop along with the rest of the counter when I’m done. It’s like I pushed the easy button on cleaning the stove.

No pan, no heat

Induction heating works through an electromagnetic field below the glass cooktop surface. So the cooktop only heats up when it's connected to a pot or pan with a magnetic bottom.

There's also no open flame with the induction cooktop. My daughter loves to cook, and her long hair is right around the same height as the top of the range. When we were using the natural gas range her hair was right at the same level as the flame, which terrified me. Now she still scares me when she cooks, but I feel a little better knowing that she's not near an open flame and there's no natural gas that might accidentally be left on.

As mentioned, I have a bit of anxiety around open flames, so I might as well admit that I'm also pretty particular about indoor air quality. Years ago when I was first becoming concerned with my own environmental impact, I learned about how bad most indoor air quality is for us. There are many reasons for this, but natural gas stoves are one major factor contributing to poor indoor air quality (source).

"The U.S. Environmental Protection Agency (EPA) studies of human exposure to air pollutants indicate that indoor levels of pollutants may be two to five times — and occasionally more than 100 times — higher than outdoor levels. These levels of indoor air pollutants are of particular concern because most people spend about 90 percent of their time indoors."

- Why Indoor Air Quality is Important to Schools, EPA

The induction range makes me feel a bit better about the indoor air quality in our house, although I still keep windows open when I cook as often as possible. I also still turn on the hood vent every time I cook to make sure all the smoke and food smells get pushed outside rather than lingering in the house.

Not to scare you, but every year about 430 people die from carbon monoxide poisoning in the United States and about 50,000 people visit emergency rooms due to CO poisoning.

"CO is found in fumes produced by furnaces, stoves, lanterns, and gas ranges, or by burning charcoal and wood. CO from these sources can build up in enclosed or partially enclosed spaces. People and animals in these spaces can be poisoned and can die from breathing CO," according to the CDC.gov (source).

But carbon monoxide isn't the only problem associated with natural gas in the home. Each year, on average, there are 25 incidents and 5 fatalities due to gas-distribution pipeline accidents according to Reuters (source).

Although I'm not a fan of scare tactics to get people to make personal changes, I did want to mention these because I just don't see a lot of public awareness about these issues. Always keep at least one working carbon monoxide alarm in your kitchen. I also have one in my garage, since car fumes can also build up.

One step closer to an all-electric home

Finally, the main benefit of getting an induction range is that we are now one step closer to cutting the natural gas line to our house. I know we have a long way to go. We still have several other natural gas appliances. But at least I can check the gas range off the list. As I always say, sustainable living is a journey, not a destination. I focus on progress, not perfection. Today, I see the progress.

The cons of the freestanding induction range

Although I do love the induction range, there are a few cons.

The cost of upgrading our electrical outlet

This was a big one. Although the induction range was not that expensive in the grand scheme of all our sustainable house projects (it cost about $2,400) we spent an additional $1,200 to upgrade the electrical outlet.

Our house was built in 1960 so we should have simply upgraded the entire electrical system when we first moved in. Alas, we did not, and now we’re piecing it all together. We do have an electrical box with enough juice to power charging the electric car and the induction range, so at least we didn't need to pay for that.

Some pots and pans no longer work

I read about this before we bought the induction range, but it's still a bit of bummer when I go to use a pan and it no longer works. I have about 10 pots and pans that I use frequently, and about three or four no longer work with the induction cooktop. Luckily, my favorite cast iron pan from Cuisinart is still going strong.

If you're considering getting an induction range but you're worried about whether or not your pans will work, you can test them by sticking a magnet to the bottom of the pan. If it sticks, your pan will work with the induction range. If it doesn't stick, it won't.

No electricity, no cooking

The only thing that gave me pause when we were getting rid of the natural gas range was that I wouldn't be able to cook when the power goes out. We have several power outages per year, and being able to cook on our natural gas stove has always been a saving grace. I cook three meals per day, so when there's no way for me to cook, my kids go haywire. Peanut butter honey sandwiches only go so far in my home.